From the Loyola Kids Book of Heroes by Amy Welborn:

What do heroes do?Do they fight monsters? Sometimes, but they also hold the hands of people who are sick and lonely. They build schools. They study the planets. They forgive those who have harmed them. Heroes are people who look at the world around them, see what needs to be done, and through the grace of God find the strength to help others. In the thirty-six stories in Loyola Kids Book of Heroes, you’ll meet a Catholic nun who stood up to the most infamous outlaw in the Old West. You’ll learn how entire villages of men and women devoted their lives to building great cathedrals to show their love and respect for God. You’ll learn about John the Baptist, Blessed Teresa of Calcutta, Charlemagne, St. Albert the Great, Dorothy Day, St. Patrick, and many others. Most of all, you’ll learn that with God’s help anyone can be a hero and make the world a better place. 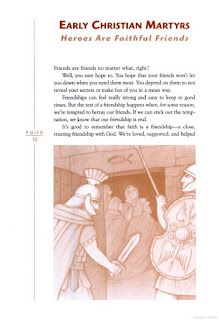 \The Greek word martus signifies a witness who testifies to a fact of which he has knowledge from personal observation. It is in this sense that the term first appears in Christian literature; the Apostles were "witnesses" of all that they had observed in the public life of Christ, as well as of all they had learned from His teaching, "in Jerusalem, and in all Judea, and Samaria, and even to the uttermost part of the earth" (Acts 1:8). St. Peter, in his address to the Apostles and disciples relative to the election of a successor to Judas, employs the term with this meaning: "Wherefore, of these men who have accompanied with us all the time that the Lord Jesus came in and went out among us, beginning from the baptism of John until the day he was taken up from us, one of these must be made witness with us of his resurrection" (Acts 1:22). In his first public discourse the chief of the Apostles speaks of himself and his companions as "witnesses" who saw the risen Christ and subsequently, after the miraculous escape of the Apostles from prison, when brought a second time before the tribunal, Peter again alludes to the twelve as witnesses to Christ, as the Prince and Saviour of Israel, Who rose from the dead; and added that in giving their public testimony to the facts, of which they were certain, they must obey God rather than man (Acts 5:29 sqq.). In his First Epistle St. Peter also refers to himself as a "witness of the sufferings of Christ" (1 Peter 5:1).
Posted by Amy Welborn at 11:30 PM