The Apostles is a collection of the catecheses Pope Benedict XVI gave during his weekly General Audiences in 2006 and 2007. The talks were given in either St. Peter’s Square or, in less favorable weather, the Paul VI Hall next to St. Peter’s Basilica.

Below are excerpts from a study guide written by Amy Welborn and available for free download here.
Below are some of questions for the session on St. Paul
Questions for Study
1. How does Luke describe the early Christians? What identifies them?
2. How would you characterize Paul as a person and as a disciple?
3. What was at the center of Paul’s faith (a) before and (b) after his conversion?
4. How would you describe Paul’s conversion? What does his conversion reveal to us about the essence of Christian identity?
5. What were some of the difficulties Paul faced in his mission? What kept him going?
6. What are the two basic questions about faith asked and answered by Paul, both by word and by example?
7. What does “being justified” mean? What does the “new justice” consist of ?
More 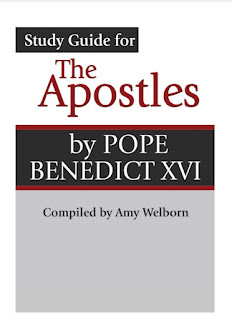