Prove It Jesus by Amy Welborn 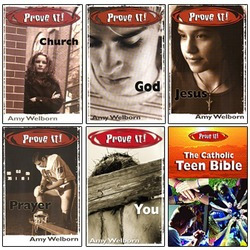 Excerpt from Chapter 2 of

Prove It: Jesus by Amy Welborn

I've Always Wondered...
What Are the Basic Facts About Jesus?

If you’re like a lot of young people I’ve known, there are a couple of aspects to this Jesus story that drive you absolutely batty.
Actually, it’s not what’s said, but what’s unsaid.
*What did Jesus look like?
And…
*What in the world was he doing up until his public ministry?
That last question has a lot of subheadings, by the way. What was Jesus like as a child? What were his teen years like? Did Jesus ever fall in love? Did he ever have conflicts with Mary and Joseph? Did he like to have fun with his friends, or did he just sit around all day building stuff and studying the Scriptures?
(Oh yeah – about that studying stuff. If Jesus was fully God, would he have had to study and learn at all? But doesn’t the Bible say that “Jesus advanced in wisdom and age and favor before God and man?” (Luke 2:52). How does all that fit together? I know, I know – but you’ll just have to wait until Section II for that knotty discussion).
In fact, some kids even get irritated at the Gospel writers for not including that kind of information.
“Didn’t they know that we’d be interested in that stuff?” they wonder.
The fact is – no. They didn’t.
Remember what a Gospel is. It’s not a modern biography, reflecting modern interests in the everyday details of a person’s life. If it were a biography, that’s exactly what we’d call it.
But we don’t. We call it a Gospel – a written account of the Good News of God become human in Jesus of Nazareth. The evangelists were interested in conveying the information that was most pertinent to that cause, not just heaping all kinds of detail that really didn’t relate. Not that they didn’t know more about Jesus than they wrote, mind you. Listen to what John says at the end of his gospel:

There are also many other things that Jesus did, but if these were to be described individually, I do not think the whole world would contain the books that would be written. (John 21: 25)

So this is what it all comes down to: the evangelists were doing some very focused work as they listened to the stories about Jesus that had been passed down by reliable sources. They were focused because, from a very practical standpoint, their physical resources were limited: they couldn't just run down to the office supply store to pick up another ream of paper to accommodate all that they knew about Jesus. For that very practical reason, they had to make choices about what was most important to communicate.
But there was also a theological reason for the evangelists’ selectivity.
Think about the times you’ve had to relate a story – perhaps you had to tell your parents about a rather unpleasant occurrence at school, one that you wished had never occurred, but did nonetheless, right in the middle of English class, right in front of the very surprised teacher who had no idea you felt so strongly about Geoffrey Chaucer, one way or the other.
How do you tell the story of what happened? Even if you’re committed to an absolutely honest retelling, you know that you wouldn’t have the time to go over every little detail of the scene, nor would you be able to go into an extensive account of even your own, admittedly murky motivation for saying what you said.
Just like the Gospel writers, you’re limited. They didn’t have a lot of papyrus to spare, and your Mom’s face tells you don’t have much time to waste in explaining this mess. The Gospel writers had a very specific purpose – to give the world the evidence that Jesus was the Messiah, the Son of God, and your purpose, while much different, is very focused and precise, too – to tell the truth about your actions, with a minimum of fallout.
That’s all just a very long way of saying this: the Gospel writers, as much as we might wish they were, simply weren’t interested in what they saw as marginally important details about Jesus’ childhood and appearance. In other words, they didn’t care. They cared about the essence of what Jesus was all about: the loving, forgiving, saving Presence of God among us who’d preached, healed, died, and risen. So perhaps we should take it as a hint: if that’s what they were interested in, that’s what we should be up to exploring as well!


Back to main Prove It page
Posted by Amy Welborn at 10:30 PM