From Pope Benedict XVI's General Audience Catecheses on the Apostle Andrew. Image is from a study guide on the talks by Amy Welborn, available as a free download here.

Andrew, then, was the first of the Apostles to be called to follow Jesus. Exactly for this reason the liturgy of the Byzantine Church honours him with the nickname:  "Protokletos", [protoclete] which means, precisely, "the first called".

And it is certain that it is partly because of the family tie between Peter and Andrew that the Church of Rome and the Church of Constantinople feel one another in a special way to be Sister Churches. To emphasize this relationship, my Predecessor Pope Paul VI, in 1964, returned the important relic of St Andrew, which until then had been kept in the Vatican Basilica, to the Orthodox Metropolitan Bishop of the city of Patras in Greece, where tradition has it that the Apostle was crucified.

The Gospel traditions mention Andrew's name in particular on another three occasions that tell us something more about this man. The first is that of the multiplication of the loaves in Galilee. On that occasion, it was Andrew who pointed out to Jesus the presence of a young boy who had with him five barley loaves and two fish:  not much, he remarked, for the multitudes who had gathered in that place (cf. Jn 6: 8-9).

In this case, it is worth highlighting Andrew's realism. He noticed the boy, that is, he had already asked the question:  "but what good is that for so many?" (ibid.), and recognized the insufficiency of his minimal resources. Jesus, however, knew how to make them sufficient for the multitude of people who had come to hear him. 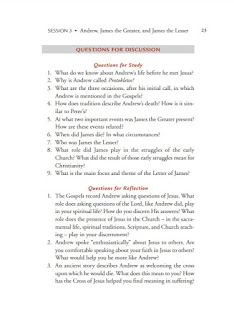