This is one of those thoughts that comes to you in a moment of clarity with such force that you wonder how it could be that everyone just doesn't see the truth of it.

Last night when I made one of my few trips to the door to hand out candy, it just hit me. There I was confronted with a skull painted white on the face of an African American, who was standing there holding open a bag, expecting something from me.

A home invasion? No.

I gladly obliged his request with a handful of candy and he turned and went on his merry way to join the other hordes of beggars that flooded our streets.

I had just fulfilled the mandate of the Gospel of Jesus Christ! I had just welcomed Him in the guise of the hungry, "When I was hungry, you gave me something to eat." Matthew 25!

"When did we see you Lord?"

Is there anytime left in our year when Americans are so blatantly Christian, welcoming the strangers that come to their door? Is there anytime that we reward those who on purpose try to repulse us by their costumes?

Yet the thought that it is better to give than receive dominates this day and truly the day fulfills its purpose of being the eve of All Saints Day! For if we are ever to join the saints we must learn to make everyday Halloween!

So that today when we meet those we might otherwise demonize, we give what we have freely as though we were meeting Christ Himself in the streets (and if we believe the Gospel message we are in fact meeting him)!

I used to joke that strangers could in fact be demons, (this was when the angel rage was in full swing and I use to make the point that yes a stranger might be an angel but who is to say if it is a good one or a bad one--sort of a twist of the Glenda the Good Witch's question to Dorothy in the Wizard of OZ, "Are you a good witch or a bad witch?"), but I would ask you to reflect on Halloween a bit more with me.

If we give to the stranger, indeed we welcome them as Christ. But if we look at the stranger only as someone who has something to give and we judge them based on that we are apt to conclude that all strangers are demons!

For example if we start viewing every middle eastern looking Arab that we do not know personally as a terrorist we are forgoing an opportunity to see them as Christ (who happened to be of middle eastern descent). Abraham was visited by three strangers (one would presume of middle eastern descent) and he fed them--they turned out to be angels and they gave him a blessing! But let's suppose that we in fact do come across some terrorists in our daily activities. What if our interaction with them, seeing them as Christ and giving them whatever we have to give at that moment (even if it is only a smile of acceptance) led them to change their whole way of viewing Americans?

It is sad to think that a day that is the perfect example of what it means to be a Christian has been protested by so many Christians in this country. Do they read the Gospels?

No one is celebrating or worshipping demons on Halloween. The children who dress up in their costumes are playacting and giving the individual behind every door an opportunity to imitate Christ.

It is also sad that many miss the point in the other direction. They overdo it in the name of "everyone else is doing it" and light their houses up as though it is Christmas, rather than encountering the little masked Christs in the darkness the way it is intended to happen and does happen in daily lives. The vacuous nature of their souls demands making a show of their giving. Sadly they have already received their reward--the empty praise of their neighbors and friends.

There have been moves lately among some Catholics to have children dress up as saints-- this may be a fine thing to do on All Saints day but it totally misses the point of Halloween. We will never be saints, nor will we imitate them, until we open the door everyday and welcome the ghouls we encounter as though they are Christ. 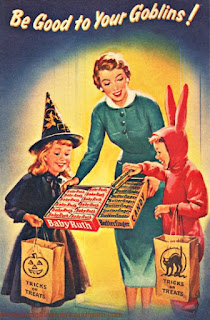