From Pope Benedict XVI's General Audience Catecheses on the Apostles. Image is from a study guide on the talks by Amy Welborn, available as a free download here. 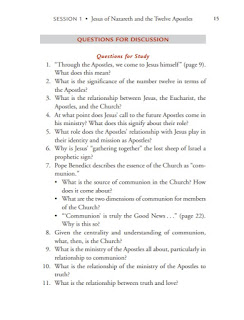 The number 12, which evidently refers to the 12 tribes of Israel, already reveals the meaning of the prophetic-symbolic action implicit in the new initiative to re-establish the holy people. As the system of the 12 tribes had long since faded out, the hope of Israel awaited their restoration as a sign of the eschatological time (as referred to at the end of the Book of Ezekiel:  37: 15-19; 39: 23-29; 40-48).

In choosing the Twelve, introducing them into a communion of life with himself and involving them in his mission of proclaiming the Kingdom in words and works (cf. Mk 6: 7-13; Mt 10: 5-8; Lk 9: 1-6; 6: 13), Jesus wants to say that the definitive time has arrived in which to constitute the new People of God, the people of the 12 tribes, which now becomes a universal people, his Church.
Appeal for Israel

With their very own existence, the Twelve - called from different backgrounds - become an appeal for all of Israel to convert and allow herself to be gathered into the new covenant, complete and perfect fulfilment of the ancient one. The fact that he entrusted to his Apostles, during the Last Supper and before his Passion, the duty to celebrate his Pasch, demonstrates how Jesus wished to transfer to the entire community, in the person of its heads, the mandate to be a sign and instrument in history of the eschatological gathering begun by him. In a certain sense we can say that the Last Supper itself is the act of foundation of the Church, because he gives himself and thus creates a new community, a community united in communion with himself.

In this light, one understands how the Risen One confers upon them, with the effusion of the Spirit, the power to forgive sins (cf. Jn 20: 23). Thus, the Twelve Apostles are the most evident sign of Jesus' will regarding the existence and mission of his Church, the guarantee that between Christ and the Church there is no opposition:  despite the sins of the people who make up the Church, they are inseparable.