August 2 - Our Lady of the Angels

of the Portiuncula. From a Chapuchin site:


This is the patronal title of the Blessed Virgin under which St. Francis placed the Order. St. Francis had great devotion to Our Lady under this title due to his repairing of the little chapel of the “Portiuncula” (little portion) in the woods outside Assisi and becoming devoted to it as a place of prayer and meditation in which the earliest brothers gathered and St. Clare was first received into her vows, where St. Francis had a number of visions on Our Lady and the Angels and received the famous privilege of the “Pardon of Assisi” from the Pope, (a plenary indulgence that anyone may receive under the usual conditions in any church throughout the world in honour of Our Lady of the Angels.)Finally, it was at the Portiuncula also that Francis greeted Sister Death and passed to the Lord in the year 1226.

I mention it because the Portiuncula provides the setting for one of the scenes in Adventures in Assisi.
Here's the painting by Ann Engelhart. 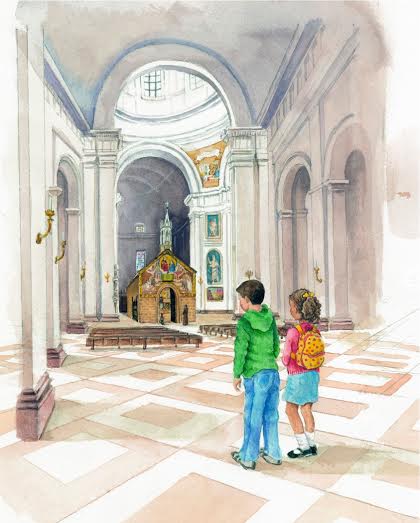 Visit her website here, and her Instagram here, full of lovely art.
More about Adventures in Assisi here.